The Power of Being Challenged

At Hampton Roads Academy, an award-winning independent college-preparatory school on the Virginia Peninsula, there is a strong sense of community as well as intellectual rigor. Looking at the future of education and the needs of their school, Hampton Roads Academy (HRA) fine-tuned their vision and identified several top-tier opportunities for improvement. However, they also recognized the need for a partner to develop and implement an effective strategy to make their vision a reality.

Our team began by partnering with HRA to conduct a campaign planning study prior to the launch of their Navigating Our Course campaign. The funding priorities included expanding the lower school, building a new dining hall, updating the tennis courts and growing the endowment. This study identified a dedicated board and strong culture of giving that would serve as a strong foundation during the campaign as the school built relationships to increase support from major contributors.

With the roadmap of their planning study in hand, HRA and our team partnered for 18 months on the campaign. We worked together with the board and staff to identify campaign leadership, coach and mentor about fundraising best practices and meet individually with top prospects to identify their commitment to the campaign. The staff, board and campaign leadership set an inspirational precedent that would shape the rest of the campaign and propel HRA to reach their goals.

“To expand upon Frank Herbert’s phrase, if ‘Fear is the mind killer’ then doubt is the mother of paralysis. In every facet of a campaign you must champion confidence and belief in the cause you are leading. The Curtis Group’s guidance, passion and strategy focused our confidence and gave us the tools we needed to lead a transformational and successful fundraising effort.”

WHEN CHALLENGES ARE GREAT

HRA was able to increase momentum and reach new fundraising levels when an anonymous donor came forward with a $500,000 challenge gift. The dollar-for-dollar matching challenge inspired other donors to step up their support. Many donors who had already made a commitment to the campaign were motivated to make an additional gift, some even doubling their original pledge.

After the success of this challenge, the school leveraged another $250,000 gift toward the end of the campaign to encourage their broader base of parents and alumni to join the effort. HRA has a dedicated group of multi-generational families and alumni committed to the future success of the school. The school created a catalogue of furniture, equipment and other needs in the new space that could be sponsored by these donors as part of the challenge. The combination of the challenge gift and the unique fundraising approach moved HRA over the finish line.

Today, HRA has seen firsthand the power of good leaders and good partners. Our team worked with the staff and campaign leadership committee to ensure that the campaign did not detract from but instead increased ongoing annual fund support. HRA had great success securing multi-year annual fund commitments as a part of campaign solicitations.

HRA successfully raised $7.5 million toward the Navigating Our Course campaign. The lower school is helping new students excel, the dining hall provides a place to build community, and their culture of philanthropy and fundraising program is set up for future success. 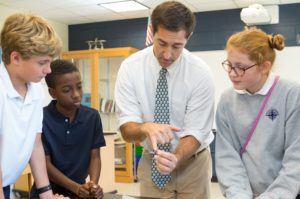