A look at giving growth over last 30 years in Hampton Roads, where our firm is headquartered.

It seems ironic now—the decade most linked with materialism and excess consumption being the birthplace to a day of benevolence. Or perhaps it was perfect timing to refocus our priorities. President Reagan officially established National Philanthropy Day in 1986, after prompting from the Association of Fundraising Professionals. Celebrated each year in November, this holiday recognizes the impact that charitable giving and philanthropic engagement have made on society.

Its 30th anniversary has concluded just as the same anniversary approaches for our nonprofit consulting firm, The Curtis Group. We’ve been doing the work we love for nearly three decades and are honored to be philanthropic partners in Hampton Roads. By working with donors and volunteers, we’ve seen firsthand the way they are improving lives and making a difference in our community.

A 114% increase in three decades

As The Curtis Group has been sponsoring four National Philanthropy Day celebrations throughout the commonwealth this month, it struck me just how much philanthropy has changed over the past three decades.

Nationally, giving has more than doubled since 1986—from $82 billion that year ($182 billion in today’s dollars) to $390 billion in 2016, according to Giving USA, the longest-running and most comprehensive report on American giving. I should also note that 2016 marked the third straight year of record-breaking giving, after a dip during the recession, and that contributions to all nine major philanthropy subsectors increased for only the sixth time in the last four decades.

Not only are we giving more, but we are giving in more ways

Instead of simply cutting a check to our house of worship or favorite charity, we’re increasingly giving through community foundations and donor-advised funds, to maximize our gifts. We’re not just giving from the family desk, but from coffee shops and waiting rooms and even traffic jams.

The rise of online giving has brought social media campaigns and crowdfunding. Philanthropy is an anytime, anyplace act and there are more and more vehicles to assist us in giving. And among high-net-worth individuals, there has been the rise of “mega gifts”—such as Sheryl Sandberg’s $107.16 million donation to her family foundation last year. Hampton Roads residents have made more than 40 contributions over $1 million in the past few years, which would have been unheard of even 10 years ago.

It’s not only the wealthy who have stepped up their giving. Citizens of Hampton Roads are giving significantly more than they were three decades ago. By working intimately with our community’s nonprofits, our firm has witnessed exponential growth in giving. While there is no single measure of giving in Hampton Roads, two of our area’s leading philanthropic organizations give us a brief snapshot of the growth in local giving. 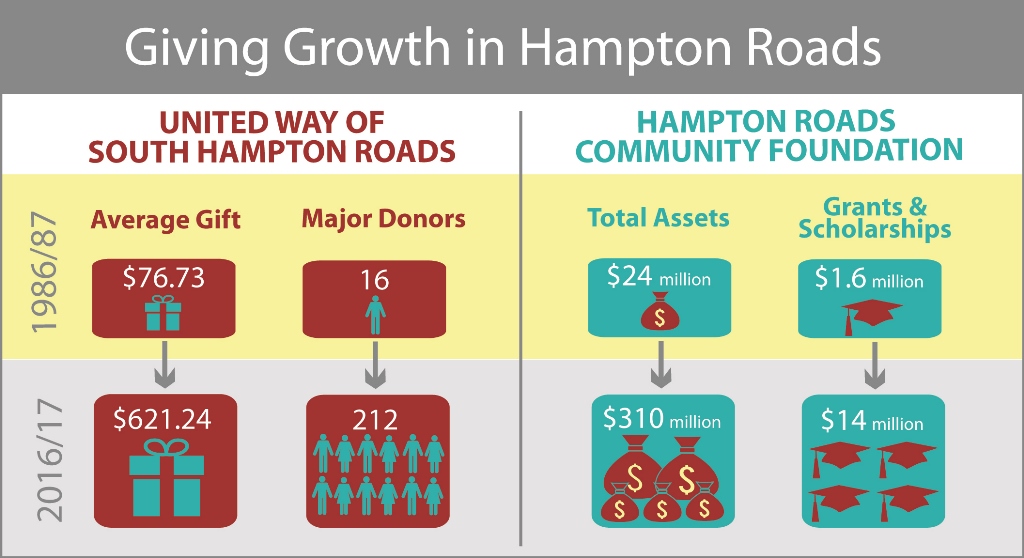 As it happens, United Way also began their Tocqueville Society for major donors 30 years ago. At the time, there were 16 members—giving between $10,000 and $15,000 each. Tocqueville’s membership now numbers 212, including two donors who gave over $1 million. This increase in major gifts, coupled with huge growth in their average gift, has allowed United Way to make an even greater impact in our community. Likewise for growth at the Hampton Roads Community Foundation, which reports their donors showing a new emphasis on generational giving, where people want to leave donor-advised funds to their children to encourage them to be charitable.

We can also look to some individual nonprofits as a barometer for Hampton Roads philanthropy. The Curtis Group has two local clients that were founded 30 years ago: Sugar Plum Bakery and the Virginia Aquarium & Marine Science Center.

Sugar Plum began as a grassroots effort by Virginia Beach families who wanted employment opportunities for their adult children with intellectual disabilities. Opening inside an old house in 1987, the bakery existed hand-to-mouth—paying the workers each week directly from board members’ wallets. Today, it has a custom-designed two-story building with a new coffee bar, a computer lab, a wedding cake business and a dedicated staff that has helped hundreds of individuals with disabilities gain job skills and independence. This is a great example of what can be accomplished when volunteers come together—today, over two-thirds of American households volunteer with nonprofit organizations.

The Virginia Aquarium opened in 1986 thanks to $2 million raised by the board of trustees, coupled with another $2 million from the commonwealth and $4.5 million from the City of Virginia Beach (total campaign of $8.5 million). It welcomed 250,000 visitors in its first year. Today, annual visitation to this local landmark is 690,000, and the current $43 million campaign we’ve helped them conduct includes $15 million from the private sector and $28 million from the city. The Aquarium has expanded its education programming to all public school districts in Hampton Roads, especially Title I schools, and its research and conservation arm has grown its reputation to the international level. Community support has enabled this organization to vastly expand its reach and impact.

It’s clear that Hampton Roads is committed and engaged with its nonprofit missions. You are making a meaningful impact on our community, our nation and our world. Be sure to carry this energy forward by continuing to support the nonprofit missions that move you. A great time to do this is on Nov. 28, which is #GivingTuesday—the holiday immediately following Cyber Monday. It’s an opportunity to be part of an international effort to give back, right before a season where mass commercialism can distract us from what truly matters. Keep up the good work!