A closer look at this population’s motivations, expectations and behaviors, according to the recent U.S. Trust study 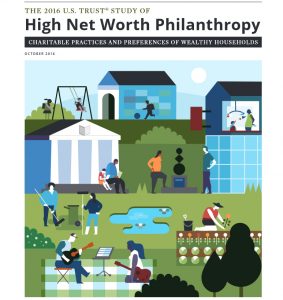 How engaged are the wealthy in philanthropy?
What drives their giving?
How much are they giving?
What would inspire them to give even more?

These questions are thoroughly addressed in the 2016 U.S. Trust Study of High Net Worth Philanthropy, which was written and researched in partnership with the Indiana University Lilly Family School of Philanthropy. As immediate past chair of Giving USA Foundation, which also partners with the Lilly School, our president Keith Curtis was asked to make a presentation on the findings earlier this month at Old Dominion University. Joining him was Erin K. Hogan, Philanthropic Market Executive with U.S. Trust, who co-presented this strategic conversation.

As Keith and Erin described, the study found that 91% of high-net-worth individuals (HNWIs) gave to charity last year, and 51% volunteered. By percentage alone, these numbers far exceed the rates of giving and volunteering by the general population (58.8% and 25%, respectively). The average amount given by high-net-worth households last year was $25,509, compared with $2,520 in the general population.

HNWIs are clearly a key demographic you should be targeting with your fundraising. You can use the valuable insights from this study to build the strategies for how best to reach these donors.

Five of the key takeaways that Keith and Erin shared:

1. Future levels of HNWI giving and volunteering are promising

2. The more engaged donors are with their giving, the more likely they are to be personally fulfilled from and generous with their support

3. While HNWIs continue to be impact driven, an even higher percentage are driven by their belief in the organization’s mission

4. For HNWI giving by category, the top three were:

(Note: Education would have been No. 3 if K-12 and Higher Ed were combined.)

The No. 1 reason why they stopped is that they were being solicited too frequently or too close together. This stresses the need to demonstrate impact and steward donors before asking for another gift.

Building on earlier research completed in 2014, 2012, 2010, 2008 and 2006, this was the sixth in a series of biennial studies using a nationally representative random sample of wealthy donors. Results of the study were based on a survey of more than 1,400 U.S. households with a net worth of $1 million+ (excluding the value of their primary home) and/or an annual household income of $200,000+.